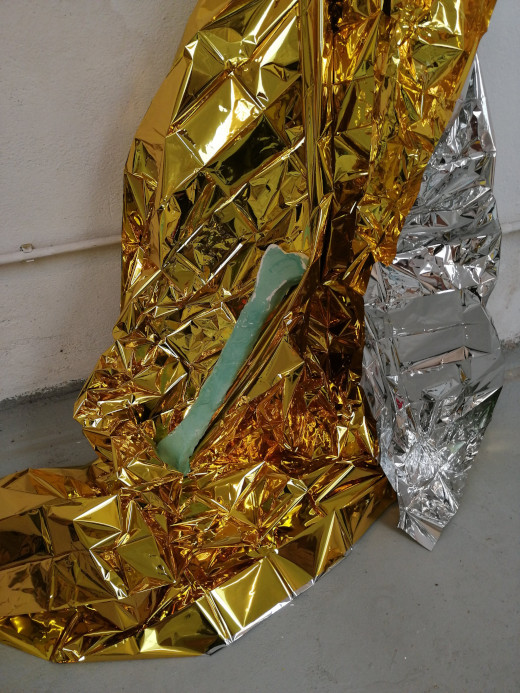 FoMO Moengo is a collaborative work with PJ Bruyniks for the Moengo Festival of Visual Arts in Surinam."Fear of Missing out Moengo" is an expression and translation of a search in Moengo. In our search for what was happening in Moengo we ended up following the music and sounds coming most of the time from cars driving around. Leaving us like we missed out on something. In Western culture FoMO is translated as an anxiety for missing out. Could we let go of this idea and experience Moengo as it is? We made a kind of road map of the center of Moengo. The places where most of the sounds are concentrated are indicated with felt patterns based upon the local Marron culture. On top of these patterns are rubber tire tracks. A looping sound file of 10 minutes is played. The base of the sound file are cricket and frog noises. Irregular you hear the passing of cars with their music. The head lights burn according to the level of the passing sounds.

Hands are the medium. The populair game of Ping Pong, the writings of Zhuangzi and the The Chinese character 看 (kàn) form the base in this work. Zhuang Zi emphasized the value of uselessness. What happens when you make the game of ping pong useless? The Chinese character 看 (kàn) means look or see. It is a compound of two characters: Hand (手) and eyes (目). In western society the eyes are connected to the brain. In what way are hands connected to seeing? This work explores the confusion of who is in charge, the eyes ? the hands? In the making of the work questions arise, as to where to localize the mind, and the mind's 'eye'. In the sorting which evens things out, Zhuangzi asks himself ''the mind or the heart, the organ of thought. Should it be allowed to take charge of our lives?” Stating the orga of thought is the heart, where in western society the brain is connected to the mind. Inspired by the 'Inner Chapters' of Zhuangzi, I will have a dialog with the game of ping pong. Here the logic/causality of the game will be in dialog with the intuitive creating process of the maker. In the exhibition space different moments of this process will coincide.